A survey of government bond dealers and other market analysts report that in 2009 a U.S. government deficit of $2 trillion is expected. This number is beyond anything ever seen before. One would think that the stock market would collapse on this dismal economic news.

When one thinks about it, all the money that will be borrowed or printed and then spent by the government will generally end up in the hands of corporations. Bailout money given to people is spent on Budweisers, Marlboros, Big Macs, toothpaste, etc. Bailout money sent to Wall Street and banks eventually is lent to someone and then spent on something. Therefore a $2 trillion borrowing binge by the government as well as the creation of even more money by the Federal Reserve which could total another trillion dollars means increased revenues and profits for corporations. This eventually will be bullish for stocks. However, it is also the road to economic ruin.

The biggest loser from this credit and money creation by the U.S. will be the U.S. dollar and 95% of the population who will be devastated by the coming inflation that will surely follow this monetary binge. There are misguided people and investors who feel a deflation is here to stay because prices of many things including oil, commodities and real estate values have decreased from the very lofty levels of 2007-2008. These price declines do not mean we are suddenly on a deflation course, it means that speculators and international hot money just went overboard with leverage and created an unsustainable demand bubble that burst. The big losers were the many financial institutions that you have read about. They are now being bailed out by guarantees, loans, and assorted asset protection from the U.S. and other world governments. This “free money” creates no real value, but it does create inflation eventually.

An island that produces 10 coconuts and has $10 in circulation will see each coconut valued at $1. That’s the way it works. Someone showing up with a motor boat and a printing press and creating another $10 on the island won’t make any more coconuts but will certainly make the price of coconuts go to $2.

It is hard to comprehend that a serious run on the price of gold has not already happened. The market usually is correct in the long run and when the obvious does not take place one can’t help but think that perhaps one’s premises or logic is flawed or wrong. You are thinking one thing and the market is thinking something opposite. Remember the very scary derivative market being written about 4-5 years ago when these toxic assets were over $200 trillion. There was no market panic, no worries. At $300 trillion, no problem. This went on for almost five years. I also wrote about them many times. But in early 2008, the banks, insurance companies and investment banks were doing fine on Wall Street even with $600 trillion in derivatives floating around—and then all of a sudden it happened. Bankruptcies, the stock market collapsing, and real estate imploding.

The market for many years couldn’t have cared less about how bad these derivatives were, so everyone thought maybe it wasn’t as bad as it sounds. Complacency was everywhere in the great board rooms on Wall Street and with the best and brightest money managers in the world. The economic establishment, financial intelligentsia and the smartest people in the world paid no attention to what was obviously a looming crisis.  Then reality showed up and the unthinkable happened. Legendary Wall Street companies collapsed and went bankrupt. A credit crisis beyond belief encompassed every economic system in the world.

The exact same thing only in reverse, is now happening with gold. Why isn’t gold going up dramatically? Despite trillions of new money being printed all over the globe and debt levels going up beyond anything ever seen before, gold has basically been quiet.  This is now the same complacency. Just because it hasn’t happened yet doesn’t mean it won’t. Just because something is unthinkable doesn’t mean it will not happen. The laws of economics are very real and the mumbo jumbo from the Fed and Washington and the well known economists will mean nothing when once again a logical cause creates a logical effect. Like the new money flooding the island, it will create the price of coconuts to skyrocket.

When gold takes off it will go higher than anyone is predicting. It will probably go up so much in one day that it will shock even me. There is not going to be a bell going off. But I can assure you, the recent panic and sell offs on Wall Street and the poor shape of the economy and financial institutions is ringing in my ears loudly.

There is no rationale explanation for the weakness of gold in 2008, and the mining stocks. It is unreal but it happened. The GGG portfolio will patiently wait for the bonanza that should arrive when the complacency ends. In the meantime the portfolio is grossly undervalued at these gold prices. Therefore we expect an exceptional rebound in 2009 that should last many years.

My advice for your other investments has not changed. Be conservative. Sell all long term bonds. Stay out of the stock market except for precious metal companies. The world is not coming to an end and we are not going to have another Great Depression. What we are going to have is an unprecedented inflation. In the event that a catastrophic financial event happens before the inflation arrives, then your best asset will also be gold and gold mining stocks. 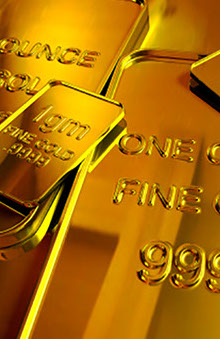