The Next Five Years

There are always major and minor causes to all effects. When one is dealing with the stock market and the economy the major causes that run the show are:

The above, in turn, influence the following:

Unfortunately, the first four major causes in all countries are influenced by politics and this always includes insanities, stupidities and underhanded policies of the collective political power structure. Whether a democracy or dictatorship the above holds true.

Therefore to get any kind of predictive capability of the economy, stock market and precious metals one has to understand how the first four causes effect different markets. In the U.S. and most other countries the abuses of these causes have been around for decades and are now at an acute stage, therefore the effects are going to be severe.

But the effects need to be analyzed for the short, medium and long term. And this is where the difficulty really lies.

I will stick to the medium term in this article. Here are my predictions based on Austrian School economic principles. For the uninitiated the major Austrian principles are as follows:

Unfortunately, our world is very far away from these sound economic principles so one has to have a game plan to survive with ones savings and investments. Below is a graph which shows how misleading GDP numbers are. Here you would think the U.S. economy has expanded over 140% since 1980. But in terms of real economic activity measured by real stuff one can see that it has been a mirage. Oil barrels consumed is a great indicator of economic activity since oil is used as a substance in over 100,000 products and energy consumption should parallel economic output. Here we see that oil consumed in barrels shows a 22% increase in 28 years. That means the U.S. economy probably has grown less 1% a year. GDP is distorted by paper money. Units not prices should be the guts of GDP. 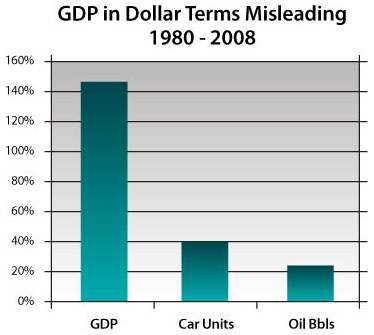 Right now the big debate is about inflation or deflation. This is always decided by money supply increases or decreases. Since the global money supply increases are excessive I really can’t see where the deflationistas have a prayer. Yes, prices have come down the last 18 months but where were prices 3-5 years ago or 10 years ago? Much lower. Expect massive inflation rates in the coming years once the money starts bubbling through the economy. Note in the graph below that the U.S. M1 money supply looks very low and this is because money in this category is actually swept out of cash and demand deposit accounts each night electronically and this understates M1. This graph also tells us that there is going to be plenty of inflation in China and India and these gold and silver loving populations are certainly going to be moving into the precious metals in a big way. 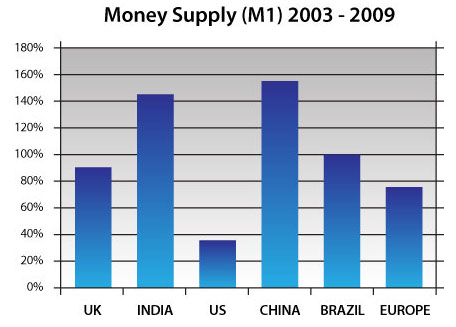 This is very simple. Population increases, and in turn the big populations of China and India progressing dramatically toward a massive middle class demand situation will have a strong influence on commodities and raw materials for the next 30-40 years. The credit crisis has delayed many capital investments in raw material projects and this will curtail supply in the medium term. Also, money supply increases will put upward pressure on commodity prices.

This is a major influence on all investments. In the U.S. it has been reckless for almost two decades and this resulted in massive speculation and over leverage in the real estate commodity, derivatives and stock markets. This affected the entire world as international markets blended together in the last two decades via technology. The authorities were then faced with catastrophic repercussions as major financial institutions were at risk and the path of least resistance was to flood the world with money and go into a lot of debt at the same time.

A World of Debt

The debt levels in some countries are now too large to pay back. The solution will be to inflate them away.

In 10 years the $10 trillion U.S. debt won’t look so bad if hamburgers cost a few hundred thousand dollars (I am joking, but you get the picture).

Long term bonds will be a very bad place to have money when the inflation that is coming forces interest rates much higher and the value of these bonds much lower.

Leverage, greed, fear and confusion are now the order of the day. Stock markets will be prone to panics and the volatility will be extreme for many years. The gold market will benefit from this but will also be very volatile. There are now tens of millions of day traders in the world. Office workers at their desks and housewives in Indonesia are trading stocks. Professionals are married to black box analytics or technical patterns (which by the way will soon become less useful, except for the more broad based patterns). Day trading is now a global phenomenon. With instant communication and 99% of global investment professionals being clueless on Austrian School economics, you can expect a lot of confusion in world stock markets.

The Next Five Years

I have to laugh when people write about the breakdown of western civilization where there are no goods on the shelves etc. and there is chaos everywhere. Did you ever see that CNN special a few years ago when they were following the smuggling routes between Afghanistan and Pakistan. You saw these guys in turbans and flip flops and donkeys going over these high mountain cliffs on narrow paths risking their lives. On top of one of the donkeys was a case of Coca Cola probably bound for a small village somewhere.  If they can handle getting Coke where people want it in the one of the most backward places on earth, I am sure the boys at Coke will also be able to figure it out here in the good ol’ USA., if things got out of hand. Ditto for almost all other goods. Good luck. 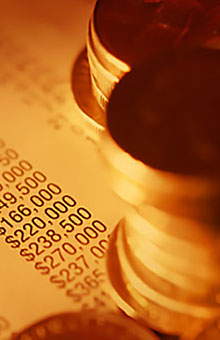