Some of the economic policies of today's society are as bad as 1929. There is too much debt, too much speculation and too much paper money. Sooner or later, a great economic accident could occur and the value of stocks, bonds, real estate and just about everything could readjust dramatically and leave a lot of well off people in financial ruin.

Gold has always been a hedge against inflations, depressions and monetary instability, therefore gold mining stocks should be in everyone’s portfolio. When Kreditanstalt went bankrupt in 1931, the ripple effect eventually took down 95% of the wealthiest families in the U.S.

The stock market continued to crash and most of the banks closed. It was a ripple effect felt all over the world. Most were wiped out but people with gold survived. Homestake mining in 1927 was $26 per share. In 1935, at the depth of the depression, it was $575!

It is unthinkable that an economic accident could occur today, but it is also unthinkable that the entire Japanese banking system is illiquid, that the U.S. government debt increased $4 trillion in the last 15 years, that there's only $380 billion of currency in circulation (actual dollar bills), yet the money supply is $1.1 trillion. The difference between these two numbers is computer blips. People think they can get cash for the money in their checking accounts but there is not enough currency to cover this. It is also unthinkable that there is nothing even backing the $380 billion in cash but 243 million oz. of gold (worth only $97 billion). $700 billion of our money supply isn't even backed by dollar bills! There is no currency, it is simply check paper and blips. It is a claim check and there is no suitcase in the storage locker. Add to this that middle class America is overwhelmed with consumer debt and the unthinkable may happen.

A lot of people could be severely impacted in the next 10 years. That's right, you could lose plenty. Why even take a chance if an economic accident had even a 50 to 1 probability? You should be smart, not scared, and hedge your wealth.

Gold mining stocks protect you against the unthinkable while offering a good rate of return over the long run and an investment in a growth industry.

Let's review some economic history that should shed some light on this discussion. During the war of 1812, the Washington D.C. banks and the Mid-Atlantic banks (the ones close to Washington) were lending out money for the war effort. They were effectively financing the war. The New England states were against the war and their banks managed their loan portfolios totally different...very conservatively.

Even though the United States was on a gold standard, individual banks could still lend out more money (at that time they were called bank notes) than they had gold in their vaults. As long as everybody didn't show up at the bank with their bank notes to exchange the notes for gold, the banks were fine and they could make good money by lending out more bank notes and receiving interest on them. This is how banks leverage their assets. This is still practiced today.

The New England banks, not familiar with the regional banks in Washington, returned the bank notes requesting gold. Since there were a lot of extra bank notes floating around, the D.C. banks had to ship more gold to New England to honor their bank notes than they actually had. The more gold that left the D.C. banks, the less base they had for other loans and they eventually had to suspend gold payments to cover their notes. In other words, default on the value backing the notes.

When this started to happen, the bank notes lost their value since they could not be exchanged for gold and they started selling at a discount. Basically, they were being devalued. When you hear about the devaluation of a country's currency, it is the same mechanism. It devalues against another currency because a similar situation has occurred. One country has issued (or printed) too many bank notes or currency with nothing backing it.

It is interesting to note that once the D.C. banks ran out of money and their paper seemed to be worthless, the U.S. government was faced with the dilemma of not being able to finance the war. The D.C. banks suspended payments of gold in December of 1814 and in January of 1815, a month later, peace was declared. They couldn't fight the war without money so they had no choice but to negotiate a peace. This is why gold is a force for peace. To finance a war, you either tax the people or print the money. Under a gold standard, you can't print too much and when you tax people to fight a war, they get upset and force a diplomatic solution saving a lot of money and lives.

The same phenomena occurred in the 1920s but this time, instead of regional banks in the United States, it happened with Central Banks all over the world. Some of them expanded their bank notes (money supply) too much and eventually had runs on the banks to exchange the paper for gold. As this happened, the basic asset behind their money was not there, and it created mayhem and devaluations in the 1930s. This created bank defaults and stock market crashes and the Great Depression and the wipe out of a lot of financial assets.

The United States at this time, since the 1930s, has made tremendous progress and advancements in all areas of society...science, technology, medicine, arts, etc., but the truth of the matter is that in the field of economics, the opposite has occurred. An incredible regression has developed. Economic policies today are much, much worse than in 1929. The five economic evils are all alive and well in the late Twentieth Century America. Big wasteful government, high taxes, paper money, government debt, budget deficits and with socialism and a military-industrial complex thrown in, it's no wonder most people can't survive well.

The valuations of stocks and bonds and real estate, etc., go up and down but when the underlying fundamental money supply and confidence in that money gets shaken and just a small portion of people try to cash out, anyone who is leveraged or has what they think is a $500,000 stock portfolio, could very easily wake up someday and see that stock portfolio at $100,000. It will be worth something but how much is a whole different story.

Gold and gold mining stocks protect you from this scenario since it is the only monetary asset that keeps its value when things are falling apart. The example of Homestake mining going up dramatically during the Depression illustrates this fact, or the Swiss franc (which had 120% gold backing) in 1973 - 1974 when the U.S. stock market collapsed (more than in 1929!) and the U.S. was in a big recession with very high inflation.

Much of our money supply isn't even there, it's literally an idea. People and institutions will someday rush to find something else that can be used as a currency, and that will be gold. Therefore, they will bid up the price of gold (or gold mining stocks) and they will discard "paper" which they have no confidence in. When there is no confidence in a country's currency, the piece of paper is worth a lot less. Assets that have been bid up based on all this money also get revalued (stocks and real estate).

Throughout all of history, the integrity and trust in gold as a means of exchange, a store of value and a monetary asset has always endured.

A portfolio of gold mining stocks is an insurance policy. But this portfolio also has a solid investment thesis resting upon the supply/demand fundamentals for gold jewelry and other gold fabrication. Jewelry demand alone, exceeds current mine supply by a wide margin. Especially in the Far East, new-found prosperity with the fall of Communism and the freeing up of markets has allowed over 50% of the world's population to begin to acquire gold jewelry, both as savings and adornment. This figure will increase steadily as well.

It is because of this above scenario that I would suggest you invest in a professionally managed portfolio of gold mining stocks. That way, you don't have to be scared about the end of the stock market or the collapse of the Western world as we know it today.

The truth of the matter is it may never happen, but an economic accident could take place, and it might take place slowly or quickly, and it could start anywhere at anytime.

Regardless, gold is the king. So why be scared when you can be smart. Have at least 10% of your net worth in gold mining stocks. This will protect you. You can go on with your life and not  have to worry so much. More importantly, if anything ever did happen, you wouldn't be part of the 95% who could get hurt. Think about being at a cocktail party with 100 people and 95 of them lose their homes, bank accounts, most of their stock portfolios and their retirement plans. Unthinkable? Yes. Possible?  Maybe.

The decision is yours and this article is not meant to alarm you but to arm you with some knowledge and understanding and an idea for monetary insurance with some good old fashion advice. Tuck some money away for a rainy day...but make it real money...gold or gold assets (mining stocks). There is insanity going on globally regarding economics. A repercussion could take place.

This does not mean that economic activity will cease - on the contrary, productivity and people getting up in the morning and going to work will take place, but many will drive to work with their $1 million portfolio shaved down to $200,000. If you owned an equal number of NYSE, Amex and OTC stocks as recently as 1974, that is exactly how bad it was, an 80% drop (revaluation) in stock prices.

What could happen (and I hope it never does) is that you could give up everything you worked your entire life for and have to start over. It won't be the end of the world but it could be the end of your wealth. 10% in gold stocks gives you a lot of protection for the other 90% of your wealth and allows you to benefit in a growth industry as well. It's that simple.

Gold works in a deflation/credit collapse/banking crisis/devaluation scenario. Gold also works in an inflation. Any extremes in either area, historically or in the modern era saw gold and gold mining shares shine. 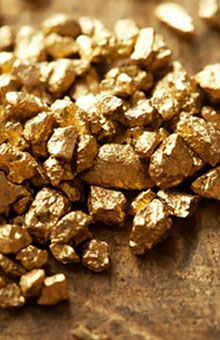