It is the paper money created out of thin air that creates the unfair distribution of wealth that is making the middle class fall more behind and the poor more poor.

Newly created money and credit in a paper money system benefits those that can access the money first and buy capital goods and real property at one price before the new money circulates and makes all prices go up. Wages also do not keep up with inflation and that creates another squeeze on the middle class.

The man in the street sees his purchasing power decreasing (from his savings and take home pay) and thus his standard of living declining. Capitalism and free enterprise have historically always benefitted the lower and middle income earners when paper money issuance has been curtailed. Most wealthy people became wealthy through hard work and supplying something to society of value. But because of this paper money dislocation, the average wage earner has not kept up.

One of the "causes" of socialistic thought is that the rich really do get richer and the poor really do get poorer in a capitalistic society that uses fiat money as opposed to a monetary unit that is tied to a standard measurement for its monetary value. A standard measurement of length (12 inches to the foot) ensures everyone a measurement that cannot be altered and used to swindle or deceive people in transactions as time goes on. A fiat money system negates a standard of monetary value or worth. The new money injected into the economy upsets and distorts the old monetary standard that existed before the new issuance of money.

Paper money and government spending are the culprits in the destruction of the lower and middle wage earners standard of living. The table below shows how lopsided and inefficient this system has become.

These glaring statistics below are an indictment of fiat money and waste in government. The Median Household Income has been left behind by the U.S. policies fostered on the population by both liberal and conservative politicians. This has allowed the insane policies of Communism, Socialism and Fascism to gain ground in the intellectual arena. Note: these other “isms” create even more fiat money and waste!  The moral of the story is government spending and increased money supplies are totally inefficient as the solution to household betterment.

The graph below shows that despite a 450% increase in money supply in 28 years the GDP did not remotely keep up. Real economic goods, actual things such as cars and energy consumed which are good measurements of economic output, these items have barely budged. The simple conclusion: real economic gain in the U.S. has been small when measured by real stuff. 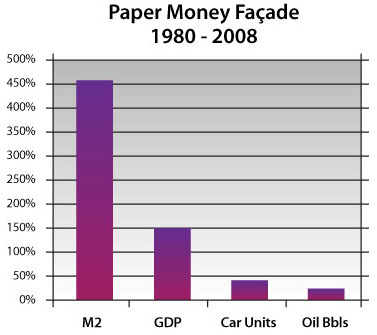 The graph below is even more of an eye opener and another indictment of paper money and government waste. From 1950 to 1965 the money supply and government intervention and waste in the U.S. economy was just starting but was still nothing compared to the 1980 - 2008 period. Below you can see smaller money increases (and a much smaller government) had an almost equal increase in GDP. It is almost 1 to 1. But during the1980 – 2008 period (graph above) it is now 3 to1. In other words more and more new money has to be issued to keep the economy going. And the more money created the more the wage earner will fall behind. 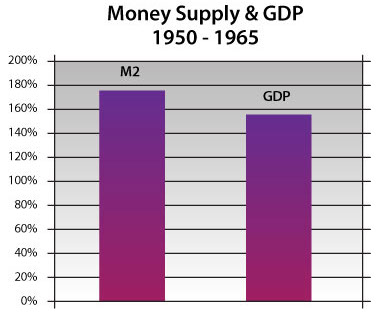 The bottom line is that printing money and big government do not help the economy move forward but in fact hurt it. The following are the consequences:

There is no attack here on corporations. They thankfully produce all the products we need and use. It is just a statement that they are, in general, currently benefitting unfairly under a paper money system at someone else’s expense – the little guy. Corporations should and can make plenty of profits without a paper or fiat system. In fact by eliminating all the dislocations and waste from government intervention caused by paper money, corporations would probably do even better with a stable and honest monetary system. The banks would not. They would downsize and be forced by the free market to only lend money they have on account. But the banking system under an honest money system would also become stable and safer.

The two graphs above absolutely make John Maynard Keynes, Paul Krugman and all the other economists that think like they do, absolutely wrong, wrong, wrong about government spending, paper money and deficit spending stimulating the economy, helping the poor and making life better for people. These are dangerous concepts to society. Keynes really did not have the intellectual capacity or personal integrity to really understand basic economic truths and concocted his own ego centric and stupid ideas that big government proponents and the banking establishment loved. It was the bankers who promoted him far and wide (the more money circulating the more loans could be made). Between him and Karl Marx, billions of people have been led down the path of economic slavery and deceit.

The Coup de Grace Against Big Government and Paper Money

The graph below is so revealing that I would think that arrest warrants should be filed against anyone even saying the words “socialism, deficit spending, paper money or big government.” 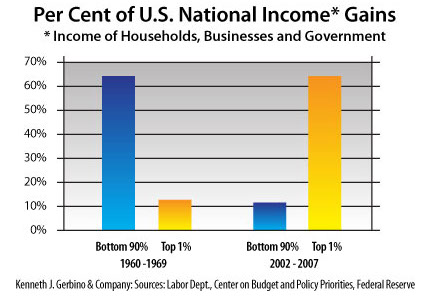 Ironically, some of these statistics are from a “liberal leaning” wealth sharing, quasi-socialist group.

What they are missing is that the “system” they are deploring – capitalism, private property, and lower taxes is not the culprit. They are totally confused. It is big government waste and paper money that is dictating the horrible loss of income gains by the lower and middle income earners. Almost 50 years ago the average wage earner was getting a fair share.

One can see that the paper money system and big government wasteful spending has created a situation where the bottom 90% of our citizens went from owning a big piece of the income gains (65%) in the 1960’s to being squashed in the 2002 – 2007 period to 11%.

This inequity was caused by an almost 1000% increase in the money supply from 1960 to 2007 and a federal budget that went from $92 billion to $2.8 trillion. These increases were destructive. They have almost destroyed America and Americans. They have allowed an elite group of politicians, bankers and social engineers to create a very dishonest and corrupt system over the past 50 years, a system with paper money and big government as the cornerstones of policy.

For more articles on Gold, Economics and Markets visit our investment management website at: www.kengerbino.com 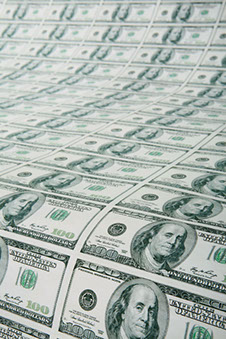