The Stock Market, Gold and the Economy

There are three main aspects to consider when one is investing today.

Let's start with the latest monthly trade deficit of $58 billion, the largest monthly deficit in history, and negative for the dollar. This also means we are now on track to break $600 billion in trade deficits for the year. The dollar cannot stay strong in this environment. Here is exactly how this works. When a $10 million locomotive comes over from Japan, $10 million is sent over to pay for it. The local manufacturer who most likely makes a 5% profit will need 95% of that money to pay all his employees and suppliers. He will need Yen. He will send his $10 million check to his bank and his bank will sell those dollars to someone somewhere in the world who will pay for the dollars with Yen. Notice that the dollars are being sold. This is why trade deficits are bad for the dollar. With $600 billion more goods coming into the U.S. a year than going out, a lot of dollar selling takes place. The U.S. economy is an "importing" economy and excessive imports weaken the dollar. When the dollar goes down gold goes up.

Next, our economy is at the end of a major economic cycle that has been extended by artificially low interest rates made possible by massive amounts of paper money pumped into the economy out of thin air. In the last five years the money supply has increased by 39%. This is excessive and always eventually creates inflation. Gold related investments are an alternative that protects one from currency depreciation.

The next building block to our rationale for where to allocate assets is budget deficits. Just released by the White House is a projected $445 billion budget deficit for 2004. This is on the heels of the $375 billion in red ink from 2003. This means that money will have to come from somewhere to make up for this. Plenty will be just printed to make ends meet. Some will be borrowed from foreigners. We are running such high deficits that it almost demands continued excessive money creation. Other governments are also operating with budget deficits and they are printing money also. All this new money and paper floating around means it is worth less.

Interestingly, the stock market actually can benefit from budget deficits for long periods of time, but it always ends. The largest customer to corporate America is Uncle Sam. The more the U.S. government spends the more companies make. Unfortunately, when the market gets overvalued and interest rates get too low (as they are now) from excessive money creation, the artificial boom comes to an end and at best a sideways economy takes place. When interest rates are very low, it is not the time to expect too much from the stock market, as rates are most likely ready to go up which is usually bad for stocks and bonds.

I like owning precious metal mining companies with some base metal exposure especially copper. The commodity boom that has started could last a decade according to some experts. Currently there is a low level of inventory in the big three metal trading centers for copper. The stats in London, New York and Shanghai are the lowest I have ever seen. Warehouse stocks of copper in these trading centers were 795,000 tonnes six months ago. Today they are 225,000 tonnes. China alone consumes 258,000 tonnes per month. With the U.S and European economies stronger than last year, copper demand should continue to be healthy. Even a slow down in China may not curtail this very strong demand for this basic metal.

China ten years ago consumed 3 million barrels of oil per day and 750,000 tonnes of copper per year. Today China consumes 6 million barrels of oil a day and 3.1 million tonnes of copper per year. After my recent trip to Beijing, I am convinced the Chinese are just getting started. Gold consumption in China should also be strong, even with mild economic progress.

We recommend being over weighted in the gold and silver mining sector, where we believe strong value and growth opportunities exist. If gold stays in a $350-$400 range for many years, many mining companies should do well by opening new mines. Developmental mining companies with large, rich and well-defined billion dollar projects offer good potential. This sector is selling at a discount to underlying Adjusted Net Asset Values. Adjusted Net Asset Value is an important mining valuation tool; this is basically a company's balance sheet items added to the future value of the company's expected after tax cash flow. When these values are below historical averages and ranges (like right now), it usually signals excellent value.

Exposure to larger companies is also recommended. Best values look to me like Freeport Copper & Gold (FCX: NYSE) at 6.2x next years expected cash flow and Placer Dome (PDG: NYSE) at 10.8x. If Cortez Hills develops the way some think, then PDG could have some extra zip in its stock price.

Wheaton River (WHT: AMEX) also at 6.2x next year's cash flow looks good. We own all these stocks in our managed accounts.

Latest Gold Supply & Demand stats look good. Jewelry demand alone has outstripped all net mine supply by 150 tonnes, a $1.9 billion shortfall for Q2 2004. One indicator I like to calculate is scrap supply as a per-cent of jewelry demand. If this is trending down then gold should go up. It means a lot less gold is being melted down and sold into the market from bullion jewelry owners. In 2003 this was 37% and in the last quarter it was 27%, a sign that people are keeping more gold under the mattress.

The bottom line is that we are entering a period when almost every economic stat you can review is bullish for gold and commodities. It is for this reason that I believe we could have a substantial bull market in all the metals. The gold and silver mining sector currently presents a strong valuation premise. Trade and budget deficits and excessive money creation will have to continue to bail out the debt ridden U.S. economy. Inflation will return and all the above-mentioned factors will underpin the basic economic rationale to own some gold and the mining shares. These factors will also create a difficult environment for the stock market and long-term bonds. Please visit our website for more articles on gold and the economy. 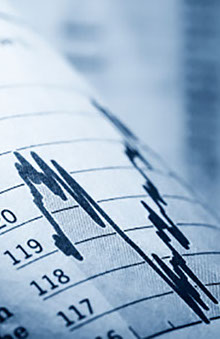