Advice on Your Gold Stocks for 2005

Before we can get a good handle on the gold stocks we need to assess the 2005 potential for gold bullion. I am assuming silver will more or less be in the same boat although I am a firm believer that the silver and the platinum group metals actually have better fundamentals for long term price appreciation.

There are some basic price drivers for gold:

Looking at all the above, there is not one item that is not long-term bullish for gold.

Now for some specifics:

Currency depreciation: The U.S. money supply (both M1 and M2) has increased 17% in the last 3 years. This is very high by past standards. China’s money supply has increased by 52.5% in three years and India comes in at 51.1%. These numbers are as of November for China and India and therefore understated for 2004.

These three countries consume on average 60% of world gold mine supply. They are all printing money like mad. Gold demand from these countries will not decrease in the face of this extraordinary money expansion.

Budget Deficits:  A simple story. The U.S. will run massive deficits for at least 2-3 more years. This forces the Fed to allow for excessive money creation. Europe has France with 9 % unemployment, Germany with 10.8%. The Europeans will have to have an easy money policy. Bullish for gold.

Trade Deficits: With the U.S. economy chugging along at a 3-4% GDP rate, there will be no end in sight here for the trade account. The latest $60 billion monthly figure is the highest in history. This means dollar pressure overall will be downward.

Forex Values: These currency fluctuations are influenced by central banks, hedge funds, speculators and tens of thousands of banks and corporations handling international transactions on a daily basis. This is a trillion dollar a day madhouse. The bottom line on all these values will be dictated by fundamental supply and demand. All the non- commercial interventions and manipulations will eventually wash out to the real values of the various currencies that will be based on supply and demand, interest rates and inflation rates. The math will be very precise on all the variables of true value.

The short-term aspect of this as it relates to gold is unpredictable. The one thing we know is that all world currencies are paper and can be printed at any rate the policy makers need to satisfy political goals. This is all artificial. Gold is not.

Inflation Rates:  Pretty tame so far but in the U.S. , but the numbers are creeping up.

With all the money creation the last three years, inflation should move up to the 5-6% level in the next year and beyond. Certainly in India and China inflation should be very strong and this will be very bullish for gold demand in these countries.

Trust in Government Policies: Financial and Monetary policy in the hands of politicians is a very bad idea…and long-term very bullish for gold.

Monetary Philosophy of the Established Order: The established order is usually concerned with  “keeping the show on the road”, this means keep the little guy somewhat happy and make sure the big guys stay afloat. It also means that those groups which have high-level access to opinion makers and policy makers can grab wealth and money from those that are not as well connected. Almost all groups are guilty of trying to get more of the pie; big banks and corporations, labor unions, importers, exporters, conservatives, and liberals. They are all in a free for all to protect their turf or get subsidies or something. Many times the “grab” is justified in the minds of those doing it.

The main point is that they are all trying to get 10 slices out of an 8-slice pie. The solution is degrading the pie and thinning it out to 10 slices. In the real world this means printing money, running deficits and appeasing as many people as possible who have no clue about sound money policies. Money is the most important aspect to all economies. The blood of any economy is the money; once you poison it there are consequences. Gold is money and an asset that is beyond the power of governments to debase.

The monetary philosophy today has been mostly dictated by the banking establishment (the most powerful lobbying group in Washington) since the turn of the century. Also you can name almost any University and you will find a paper money advocate running the economics department. A sad state of affairs for the man in the street, who is robbed of his purchasing power by these half baked policies that depreciate his savings and work week take home pay. Printing money to handle the mob at the doors of congressional offices is very bullish for gold.

Population Increases: The more people the more valuable anything that is scarce will become. Gold, silver and platinum are rare metals. A simple bullish concept. China annually consumes .16 grams (a gram is about 3% of an ounce) of gold per capita. Hong Kong consumes 2.7 grams per capita. This is a 17x difference that will certainly have a positive long-term influence on gold as China catches up with Hong Kong. For you silver bugs, China consumes 1 gram of silver annually per capita versus the U.S. at 70 grams. Plenty of upside coming for silver also.

Jewelry Demand: Last year gold demand for jewelry increased by over 5% going into the 4th quarter. This outpaced net mine supply by 476 tonnes (approx. $6.4 billion). Jewelry demand alone should continue to be bullish for gold as populations increase and hundreds of millions of new consumers come into middle class status. You can make a lot of products to handle any new demand of almost any product. But Mother Nature has made certain metals very scarce and this slow but steady increase on the demand side will not be met with supply increases from the mines.

Central Bank Selling: So far in 2004 central banks have sold 34% less gold than in 2003. Perhaps they are realizing that gold has universal appeal and that the 2.3 billion people in India and China (the next two powerhouse economies of the new century) all know the real color of money. Their central banks may actually be big buyers someday. Politically there will probably be much more criticism, antagonism and lawsuits and finger pointing directed at the central bank governors as inflation shows up due to monetary mismanagement. Selling the world’s only 5,000-year-old acknowledged king of money from their vaults to make paper and ink money look good is a practice that may be coming to an end like the Berlin Wall.

Supply and Demand: This is the real bottom line. Last year demand increased 11% in physical terms and 25% in dollar value. Mine supply declined by 4%. In 2005 expected mine supply is 2,520 tonnes and jewelry demand alone is expected to be 2,750 tonnes. Jewelry demand is almost five times as high as bar hoarding and investment demand combined. The concept of gold as money or as an investment hasn’t really been a major factor yet in the gold price equation except in India and China. When the rest of the world wakes up you will be glad you own some gold and gold stocks.

Markets get overbought and oversold. The mining stocks had a phenomenal 2002 and 2003 and at the time correctly anticipated a strong gold price in 2004. But all markets are discounting mechanisms. Therefore many investors and fund managers decided to take some profits in early 2004 and bailed out at high levels. Insiders also sold. Many of the mining stocks are priced based on the perception of their assets and the power of their corporate communication and sponsorship by fund managers that know what they are doing. Fund managers sell when the stocks are expensive, but will be around to buy these stocks again. Many newcomers came in at the highs and got burned. They may not be back for a while.

An obvious consolidation took place in 2004 and continues in 2005. Another buying opportunity is unfolding. The high-risk exploration stocks will not recover unless they find gold which is a 1000 to 1 shot. The developmental stocks with large quality deposits will be buy-out candidates. The key now is to stay with real value and to throw away the ridiculous promotion pieces that flood the mails with moose pasture companies.

The latest Bank of International Settlements accounting on Over the Counter Derivatives reports the number at $220 trillion! This includes interest rate contracts, currencies, commodities and equities. A sobering and mind boggling number. Conservative investors and institutions know that this is a potential time bomb to all paper money assets globally. Gold insurance should be a reasonable avenue for some of these players.

Now add in the fact that there is most likely somewhere near a 10,000 tonne short position in physical gold (that’s 321 million ounces or $136 billion) that has to be repaid sooner or later by the bullion banks and other carry trade professionals and you can most likely forget about gold going down too much further.

You are early in your perception that it makes good sense to own some gold assets. The rest of the investing public will show up sooner or later. The key to remember is that no matter what happens people and economies will survive. The only difference will be the valuations of financial assets.

So gloom and doom for paper money doesn’t mean people won’t get up in the morning and still eat breakfast. The only difference is their bank account and stock account may be revalued. But the world will still go on. Owning a solid gold mining portfolio with 10% of your wealth allows you to protect your financial future.

If you are depressed because your gold stocks are down and no one seems to understand the economic problems of the world that you see, just take some advice from the master of observation himself... Sherlock Holmes. 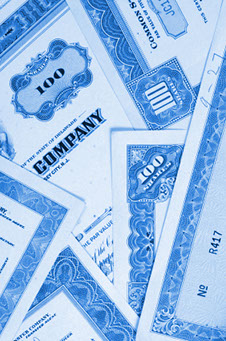