For those of you who are worried about the rand going up hurting your South African investments, I've got good news for you.  Platinum.  Platinum producers or platinum companies that will be lower cost producers will be insulated from a higher rand — I explain this below.

As a precious metal mining investor for many years, it is always comfortable to be on the right side of the basic supply/demand equation of a mineral play. The platinum story at this time looks very compelling for reasons that may last 3-5 years and even more. Also platinum has little political risk and above ground supplies are already in circulation in the global marketplace. I am bullish on all the precious metals, and the platinum story is one of the best.

The bottom line is that demand for platinum and some of the lesser-known platinum group metals such as rhodium is not only very strong but the medium-term supply side of the equation looks like it may be even more bullish. According to Johnson Matthey, platinum has had supply tightening and demand increasing for the last 6 years ending in 2004. More important is the fact that with platinum trading at 24-year highs between $800 and $900 an ounce for all of 2004, up over 54% from its average price in the 2000-2001 period, supply increases were only 230,000 ounces in 2004. This is the real telltale sign that the supply constraints on platinum could be more severe than most people expect in the next few years.

Platinum is mostly used for auto exhaust emission reduction and for jewelry and many other industrial usages. Auto and industrial usage takes up about 54% of supply and jewelry takes up about 40%. Most importantly, as the world has to turn increasingly to diesel engines, platinum will become even more important as it cannot (so far) be commercially substituted by palladium in diesel engines for emission control.

Although platinum is the rarest of the precious metals it is actually essential in the production of a wide range of goods from gasoline and paints to pacemakers, disk drives and anti-cancer drugs.

Over 75% of the platinum market is controlled by South Africa -- a de facto monopoly. If one is looking for large amounts of platinum you have to go to South Africa. Almost 70% of the platinum in the world comes from an area in South Africa called the Bushveld. It is the geological structure of this area that spells out why platinum supply may not pick up very much in the future.

Imagine a great bowl-like structure 295 kilometers across buried in the ground.

This is the Bushveld geological structure. Mother nature coated the base of the bowl with a 1-2 meter thick platinum group metal rich rock substance. The edges of the bowl come close to surface and the platinum metals can be mined by accessing this outer area of the bowl from surface. But towards the middle of the bowl, 1500-3000 meters below the surface a lot of platinum could be found but the cost of extracting it from such deep levels is extremely cost prohibitive.

Because the “coating” or reef as it is called is only at best 1-3 meters wide….  it is a small area to extract the valuable rock. The fact that it is so narrow means all the mining must be done using a lot of manual labor. Bottom line: This deep area and the narrow mining widths will mean very high cost production and supply will be limited.

The next problem with supply is that because the South African rand has appreciated so much in the last two years, the local price of platinum in rand terms is not high enough to justify the high capital costs to start production on several of the platinum projects in the country – which is bullish for the metal price. Also the underground mining cost structure is now very high in rand terms. Therefore some projects may be cancelled and many are being delayed.

Because most of the world's platinum comes from South Africa it actually doesn't matter how high the rand goes. If it stays strong for years, then for a while new platinum production will be curtailed from lack of investment, new supply will dwindle and the price will have to go up. Therefore platinum producers will benefit from the higher metal price, even though their costs will go up -- this is a unique situation.

On the other hand, if gold mining becomes more unprofitable in South Africa due to the strong currency -- and that is why the S.A. gold mining industry is in trouble -- plenty of investment in gold mines outside of South Africa can still take place because there is gold elsewhere, and a supply of gold from other countries would still be available. The reality is that the currency risk for platinum companies that are producers or who have low cost operations is nullified because there is almost no where else to go. Hence, many of the same risks that apply to any other commodity do not apply to platinum.

Supply of platinum may very well be constrained for many years. In the meantime, since global populations and middle class consumers are increasing daily, platinum demand will most likely be improving for decades. Since the metal is so rare and so useful, this looks to me like an excellent long-term investment opportunity. Also, the great hope on the horizon to replace gasoline engines in the future is fuel cells -- and guess what -- they rely on platinum.

With any commodity becoming very expensive industrial users find substitutes and then demand slows. But at $800-900 an ounce this has not happened to platinum and barring a major global recession I expect platinum to remain in a high price range.

If you are going to invest in platinum group metal companies (PGM’s), make sure they have a higher grade deposit (over 5 grams per tonne), have more platinum than palladium  and have ground on the outer rim of the Bushveld. Also if they are already producers the lower cost structure the better.

There is also one more important piece of advice. It is a bit technical but important. The western limb of the Bushveld is mature and companies have almost bled the area dry over the last 60 years. It is a mature district and costs will have to go up as they go deeper into the reefs and further away from the shafts. The eastern end of the Bushveld has different geology. The reefs are not as consistent and there are folds and ripples.

In the old days, you could, on the western limb drill 10-30 holes over a wide area and pretty much know the whole scene because of the remarkable consistency of the reefs, and plan accordingly your expensive mining infrastructure. On the eastern side some companies have run into a lot of trouble using the old methods from the west side. Therefore make sure if you are looking over a company that they have lot’s of drilling – 100-150 holes would be excellent. The more drilling the more likely there will not be any geological surprises.

The key for me was to find a platinum company that is already in production, on the Bushveld, has a low cost production mine that could withstand even a $500 platinum price and has substantial and high-grade resources that are close to the surface. Unfortunately I didn’t find any. But I did find a company that in the future looks like it could meet all these requirements.

We own this stock in our managed portfolios and in our private fund. There are no guarantees and mining is a risky business but this company looks pretty good to us.

Without going into complexities and all sorts of explanations on it’s capital structure and upcoming merger, I would suggest you visit their website and check it out for yourself.

The bottom line is that the company has a few business ends to finalize and a merger will take place and then you will have a company with over 12 million ounces of platinum group metals of which 8 million is measured and indicated, a very exceptional management team, and two platinum projects with resources that are high grade, near surface, and should become low cost producers.

The properties they will control are the Spitzkop and the Mareesburg. These properties have had extensive drilling. When the merger and the acquisition of the properties are completed, at current prices for every $1000 invested in Elgin would allow an investor to control $36,000 worth of platinum group metals in the ground. In other words the market cap per ounce of PGM resource is only $11. This is excellent value. The company also has 50 cents per share in cash and also with the warrant conversions would have $1 a share in cash.

We ran the numbers through our proprietary 270 line item computer model. Combining both projects, here is what we think is a theoretical possibility for Elgin after the merger with a fully diluted share structure after all production financings including both debt and equity: 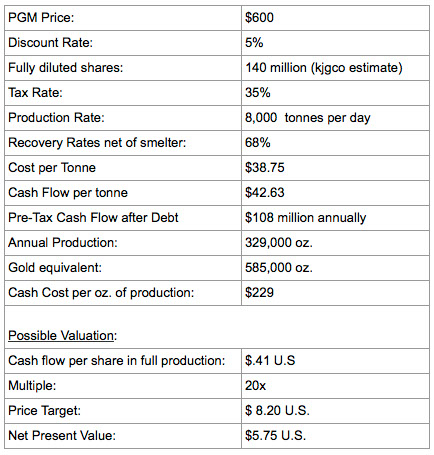 Elgin appears to represent excellent value. They could also be in a position to expand their property acquisitions on the Bushveld beyond the two excellent projects they should control in the near future.

Griffith McBurney of Toronto is the lead financier of the company and Endeavour Mining Capital will be a financial partner and merchant banker to the company. Both are well-respected and successful players in the Canadian mining industry. With mining notables such as Gene McBurney and financier Frank Giustra, Michael Beckett, and Neil Woodyer involved on the finance side, the company should have a lot of attention from Wall Street and sophisticated investors as they move forward. 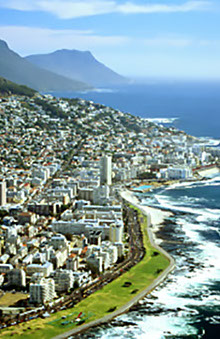