Gold and commodities are going higher in this decade. The graph below shows how commodity prices are relatively priced versus the cost of living.

Two important things about the chart is that commodity prices the last four years have already risen by 50%, but from a historic perspective the move looks as if it is just beginning a new and prolonged trend. The inflation adjusted price level today is the same as 1932 at the depth of the U.S. depression when commodity prices had collapsed. 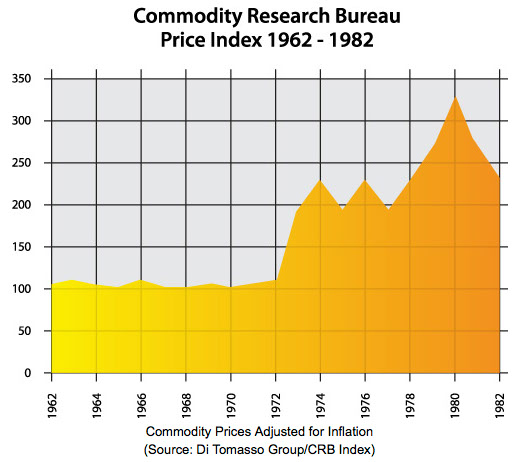 Scarce resources such as beach front property or certain metals are a function of Mother Nature, not man. Men can make machines to make millions of widgets and influence the price by overproduction, but certain metals, and other natural things like oil take billions of years to form and are not subject to the laws of oversupply unless these commodities are found in abundance. In the case of metals and natural occurring commodities, the supply is limited.

But populations grow continually over time generally increasing demand. This, plus inflation from money supply increases will add to upward price pressures. The graph above states the obvious, that the commodity decline from the 80’s and 90’s is over. A prolonged and strong across the board increase in many commodity prices is under way. This will influence inflation rates and move the price of precious metals higher in the years to come. The above graph is your road map.

Using the very simple and accepted classical measurement of what to expect as an inflationary prediction one would turn to money supply increases. Add 10% more money and you should expect 10% increases in prices sooner or later. Technology and higher productivity helps keep prices down, but many goods are consumed and destroyed which limits supply. Eating a donut means the supply of donuts has just gone down. Established interests deny printing money creates inflation but over the long term it is hard to dispute.

With higher inflation, interest rates will then have to go up, bonds will go down, and industrial stocks will have a tough time.

An economist at the Bank of International Settlements informed me a few weeks ago that the global derivative markets are $279 trillion for exchange traded derivatives but there is an additional $220 trillion in over-the-counter trade derivatives. These numbers are large enough to make one a conservative investor especially when one considers that even a 1% default rate in these speculative and leveraged financial instruments would equal almost the entire U.S. money supply.

Ex-Federal Reserve Board Chairman, Paul Volcker’s recent Washington Post opinion article was titled;  An Economy on Thin Ice . He basically warned the establishment that a “financial crises” was possible if things did not change. Policy makers in every country know what the guy in the street knows. There is no free lunch. If someone does happen to get one, you can bet that somehow someone somewhere will pay for it. Governments globally are run by an elite group of people who are elected on promises. They all know that if you do not keep the people happy, sooner or later you are either voted out or strung up. The solution for the last 20 years for these voted-in officials has been to print money and run up government debtsxbut do not stop the parade. But now the parade could be running out of steam and the financial repercussions could be severe.

I have never been an alarmist or a doom and gloom person, but bad economics (from too much debt and money printing) is bad economics. When and if things go bad, it will pay to have liquid assets that are no one else’s liabilities and regardless of any disruptive economic scenarios will stand up and be there as a store of value. Precious metals are actually the only liquid asset that can claim that position. The U.S., Japanese, Indian and Chinese economies are still positive. However, as we go forward their stock markets will have a tough time as inflation returns and interest rates follow to the upside.

The main concept I think of when buying a mining company is how much “money in the ground” do I own. If Paul Volcker is right, then the value of mining stocks will rise significantly. A good investment premise in this day and age is to own companies that allow you some financial security and insurance, but also give you exposure to growth and future cash flow. Only certain precious metal mining stocks really qualify. I would guess that 9 out of 10 of the mining stocks out there do not qualify therefore stock selection is crucial.

Portfolios should be diversified across at least a dozen mining companies that have the goods in the ground and are well financed or positioned to bring on new production in the years to come. You want growth to look forward to and also plenty of value in the ground to ultimately protect our wealth. Remember risky exploration companies give you none of the above. The high-risk end of mining should only be for a very small part of your portfolio.

Gold mine supply declined 4.9% in 2004 and there was strong jewelry demand (+5.2%) even with gold above $400 most of the year. Because of this steady and increasing demand sector and because there is at least a 5-10,000 tonne short position in gold (bullion banks and mining hedge books), it is most likely that a gold price below $410-415 is very unlikely. If gold were to go to $500- 600 then this short position could be catastrophic for the shorts. Bankruptcies for the bullion banks and professional oblivion would be the fate of anyone remotely responsible. Therefore I expect plenty of short covering on all sell-offs. This is why I feel gold at $400-410 should be a floor price. Any dips below this level most likely will be short-lived. 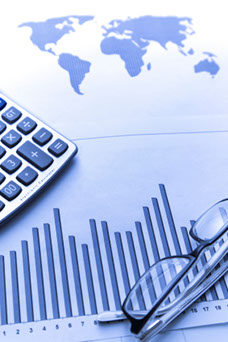