Make Sure You Have Some Platinum Stocks in
that Gold Portfolio

Investors that understand the logic of owning gold and gold shares should also be aware of the Platinum Group metals, usually referred to as PGM’s. The main components are Platinum, Palladium and Rhodium. There are some more exotic molecular hybrids of the group as well but they are of more interest to scientists than investors. I will focus on Platinum in this article.

Platinum is actually more precious than gold and has developed a strong jewelry following to tag along with it’s position as the anti-smog metal since it is used in catalytic converters on cars and trucks. The bottom line from an investment standpoint is very simple. More people are coming into the modern 21st century because of world progress and technology. China and India automobile consumption and the normal global replacement of 700,000,000 motor vehicles in the next 15-20 years will use an awful lot of Platinum.

Most of the Platinum in the world is found in South Africa (75%) and most of the near surface, low cost and large, easy to mine deposits have been discovered a long time ago and the supply portion of the equation will now start to get very tight in the years to come.

Demand has out stripped supply for the last six years by an average of 373 tonnes annually. That’s $10 billion a year on average. These deficit numbers the last two years have been much smaller but I expect this could change as our 2.5 billion new industrialized friends in India and China continue to expand even at modest rates including with some recessions thrown in.

Platinum is mostly used for auto exhaust emission reduction and for jewelry and many other industrial usages. Auto and industrial usage takes up about 54% of supply and jewelry takes up about 40%. Most importantly, as the world has to turn increasingly to diesel engines, platinum will become even more important as it cannot (so far) be commercially substituted by palladium in diesel engines for emission control.

Although platinum is the rarest of the precious metals it is actually essential in the production of a wide range of goods from gasoline and paints to pacemakers, disk drives and anti-cancer drugs.

Over 75% of the platinum market is controlled by South Africa -- a de facto monopoly. If one is looking for large amounts of platinum you have to go to South Africa. Almost 70% of the platinum in the world comes from an area in South Africa called the Bushveld. It is the geological structure of this area that spells out why platinum supply may not pick up very much in the future. Imagine a great bowl-like structure 295 kilometers across buried in the ground.

This is the Bushveld geological structure. Mother nature coated the base of the bowl with a 1-2 meter thick platinum group metal rich rock substance. The edges of the bowl come close to surface and the platinum metals can be mined by accessing this outer area of the bowl from surface. But towards the middle of the bowl, 1500-3000 meters below the surface a lot of platinum could be found but the cost of extracting it from such deep levels is extremely cost prohibitive.

Because the “coating” or reef as it is called is only at best 1-3 meters wide….  it is a small area to extract the valuable rock. The fact that it is so narrow means all the mining must be done using a lot of manual labor. Bottom line: This deep area and the narrow mining widths will mean very high cost production and supply will be limited.

The next problem with supply is that because the South African rand has appreciated so much in the last two years, the local price of platinum in rand terms is not high enough to justify the high capital costs to start production on several of the platinum projects in the country – which is bullish for the metal price. Also the underground mining cost structure is now very high in rand terms. Therefore some projects may be cancelled and many are being delayed.

Because most of the world's platinum comes from South Africa it actually doesn't matter how high the rand goes. If it stays strong for years, then for a while new platinum production will be curtailed from lack of investment, new supply will dwindle and the price will have to go up. Therefore platinum producers will benefit from the higher metal price, even though their costs will go up -- this is a unique situation.

On the other hand, if gold mining becomes more unprofitable in South Africa due to the strong currency -- and that is why the S.A. gold mining industry is in trouble -- plenty of investment in gold mines outside of South Africa can still take place because there is gold elsewhere, and a supply of gold from other countries would still be available. The reality is that the currency risk for platinum companies that are producers or who have low cost operations is nullified because there is almost no where else to go. Hence, many of the same risks that apply to any other commodity do not apply to platinum.

Supply of platinum may very well be constrained for many years. In the meantime, since global populations and middle class consumers are increasing daily, platinum demand will most likely be improving for decades. Since the metal is so rare and so useful, this looks to me like an excellent long-term investment opportunity. Also, the great hope on the horizon to replace gasoline engines in the future is fuel cells -- and guess what -- they rely on platinum.

With any commodity becoming very expensive industrial users find substitutes and then demand slows. But at $800-900 an ounce this has not happened to platinum and barring a major global recession I expect platinum to remain in a high price range.

If you are going to invest in platinum group metal companies (PGM’s), make sure they have a higher grade deposit (over 5 grams per tonne), have more platinum than palladium  and have ground on the outer rim of the Bushveld. Also if they are already producers the lower cost structure the better.

Some of the usual suspects for platinum investments would be the following major producers, which trade as ADR’s in the U.S.  Anglo Platinum (AGPPY), Impala Platinum (IMPUY), Lonmin (LNMIY). We also own a small developmental platinum company called Eastern Platinum (ELR –Toronto).

The good news about Platinum is that it is not a political metal and there is no overhanging supply in the hands of the printing press boys. 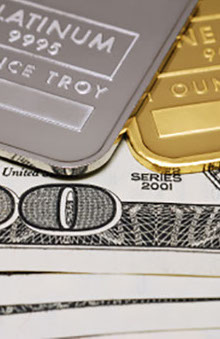