Gold, silver, and base metals, are benefiting from world economic demand factors. This demand is buoyed by relatively low interest rates in the industrialized nations and progress in the developing nations. This may continue for another year but eventually a slowdown will likely be in the cards. When inflation returns from the excess money created by most nations, interest rates will have to rise.

In the U.S., the Fed will resist this interest rate rise to assist the real estate market and the banking establishment from suffering from the excess of debt that has been issued on home equity loans and sub par mortgages. At some point the market will take over and interest rates will follow inflation they will naturally rise together. A recession should ensue. This follows past cycles.

With inflation, the precious metals will become an inflation hedge and should outperform many other asset classes. Currently the metals have appreciated because of economic growth and jewelry demand. As inflation returns, investment demand will take over and move gold even higher.

A slowdown in the U.S. economy will have less of a global impact than in the past since the U.S. is now only 22% of the global economy. In the event of a worldwide economic contraction, nations can collectively bail themselves out with money and debt creation regardless of U.S. monetary policy. This would mean continuing strong precious metal demand and be bullish for gold as many world governments will lean toward printing money to solve economic problems.. Mr. Lee (who owns a small concession in our building selling 300-400 items) says that a year ago he would buy 75 small cases of items from Costco for $450, now the same amount of items cost him $500. That’s an 11% increase. However, inflation is officially 2-3%. We believe higher and sustained inflation numbers are already in the pipeline.

India (the largest precious metal consuming country) is now experiencing strong food price increases. The powerful Congress Party just lost heavily in two state elections because of inflation. This is an indicator to us that gold and silver buying in this country will continue for quite some time because inflation is not a short term economic phenomena. Once it starts it lasts for years.

The U.S. Department of Agriculture is projecting the lowest inventory carryover of corn and soybeans in history, despite extremely good planting weather for the last 10 years. Grain prices are going to rise because of these low inventories and the diversion of corn to energy use in ethanol. Cereal and meat and poultry prices are going up because grains are the main cost to fatten them up. Later in this report I discuss another agricultural factor that is also inflationary.

The gold price in the past was always influenced by the number of commodity contracts traded on the various commodity exchanges in the U.S. Large liquidations in these commodity contract positions by commercial players and commodity trading funds in the past always saw gold decline. For the past year, there has been a counter force to this activity. Recently gold has gone up in the face of very large liquidations. This is telling us that there is massive physical buying of the metal beyond the usual players. Current gold demand is strong while global economic activity continues at a healthy pace. We believe this strong demand will likely increase as the debt and monetary excesses from the past decade start to manifest themselves.

The graph is telling an important story. This Commodity Research Bureau (CRB) graph shows what took place in the U.S. economy that at the time was almost 40% of the world’s GDP from 1962 to 1972. Commodity prices were in a historically low sideways range. Subsequently, the huge paper money increases from the 60’s and early 70’s finally took hold and prices of hundreds of basic goods exploded from 1972 -1982. This was also a good time to be in the precious metal stocks as gold increased from $100 to over $800 (in 1980). 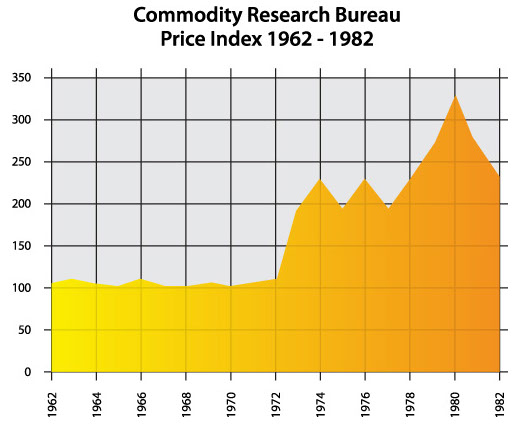 The CRB today is now threatening to repeat a similar upward phenomena in the next 5 -10 years for basic commodity goods. The paper money increases of the 80’s and 90’s will most likely begin to effect the general price level just as past paper money increases did in the 70’s (not to mention the last 600 years of economic history). The new 800 pound gorilla in this economic equation is China and India. The demand for resources from these two developing giants is going to be the major mega trend of the next 25 years.

Basic material, precious and base metal mining companies owning these resources will certainly benefit from this expected trend.

The graph below shows that adjusted for inflation, the strong commodity bull market that started in 2001 has barely begun to catch up in real terms to the general price level of everyday goods and services in the 1960’s.

This graph implies that a doubling of commodity prices from 2006 levels would only take the index in real terms to the price levels of the 1960’s. Therefore commodity prices should continue to trend much higher over the next decade. This graph makes a strong case for investing in companies that own or produce natural resources especially precious and base metals.

With global liquidity increases at excessive levels the last five years and below average capital investment by commodity producers from 1983 to 2003, all markets (Bonds, Stocks, and Commodities) in all countries will be affected by this most likely coming mega-trend. Bonds and stocks will react negatively and commodities will stay in above average price ranges and trend higher. 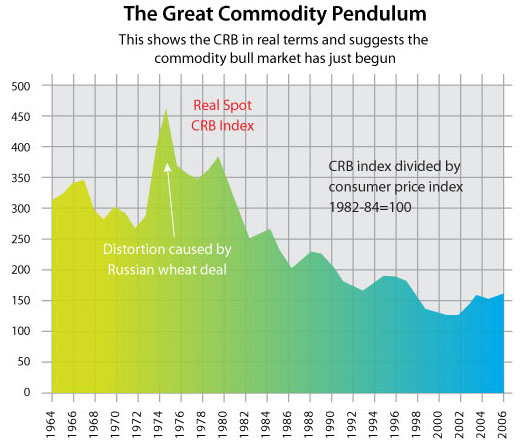 I’ve listed the “usual suspects” investors fear many times as critical reasons to invest in the precious metals; printing excess money, debt burdens at high levels, budget deficits, trade deficits and geo political unrest. The “usual suspects” are generally caused by politicians. On the horizon are various new mega trends that are caused by Mother Nature and normal people. These new trends will also affect the price of gold and silver in the future. Since jewelry demand alone takes more gold off the market each year than mines produce, the “usual suspects” combined with the new reasons below should benefit the precious metals and our portfolio companies in the coming years.

The first new trend is the inexplicable near decimation of the world’s bee population over the last 24 months. Don Coxe from the Bank of Montreal reports that 33% of the US diet comes from products that depend on bees for the crucial pollination of the producing plants. In the U.S. between 30-90% of the bee populations in various states have disappeared. This means food costs could go up dramatically in the U.S. as many crops (including fruits and alfalfa) that depend on bee pollination could face significant shortfalls. Alfalfa is a crucial feed for cattle and dairy cows and hence the price of meat, poultry and dairy products should be affected.

The second new trend is Peak Oil, defined as the peak in global oil output combined with increasing demand and therefore a supply shortage. It looks like this Peak is here right now or very close. Most oil fields hit peak production for only the first 3-5 years and then decline by 5-20% annually until the field becomes uneconomic. Over 75% of the oil fields that supply 80% of the world’s oil are all in unstoppable production declines. For every four barrels of oil we consume we only find one barrel to replace it. Consequently, energy prices are going to stay high or go even higher in years to come.

Food and energy are a big part of the inflation picture, therefore accelerating inflation is coming to the U.S. as the trends mentioned above are now joining the “usual suspects”. Economist John Williams reports that of the top 20 largest central banks in the world, 18 of them are printing money at double digit rates. This alone is a good reason to expect more global inflation in the future.

Foreign central banks own trillions of dollars of U.S. Bonds. In the coming years when they decide to sell just a portion of what they own, it will force the Fed to purchase this debt. The Fed can only accomplish this by creating new money and it will coincide, most likely, when the forces of inflation are already on the move. The combination of these two events will propel gold, silver and other metal prices much higher. A gold price above $500 (substantially below current levels) will still have positive implications for many of our portfolio companies. Inflation in the U.S. is still officially up and down every month without a real strong uptrend.

Paper Money and the Developing Nations

Hangzhou, Changchun, and Chengdu are not well known cities in the world, yet each have over 5.5 million people and are among the 50 largest cities in the world, 12 of which are located in China. These cities are facing an urban population expansion as China industrializes which has created huge demands for raw materials, especially metals.

The Chinese, Indian, and Russian populations will require more raw materials than the world has ever experienced. These governments are also mismanaging their economies with inflationary policies well beyond the danger point which could cause metal prices to persist in much higher ranges than past economic cycles. Our portfolio is strategically positioned to take advantage of many new mines coming on stream in the next 1-2 years to supply these needed minerals. The gold and silver component supplies the desire for an inflation hedge and savings alternative for billions of people living in these countries as well.

All global markets including the metals/mining stocks are experiencing unusual volatility. This may continue for awhile longer. I am sure that the mining stocks which are still oversold and undervalued versus the current price of gold should have a strong 3rd and 4th quarter. There are just too many factors that are on the horizon for gold not to respond to higher levels.

The mining sector lead by the gold and silver mining companies should be the premier investment sector for the next decade. Patient investors should be rewarded with above average returns while enjoying above average portfolio and monetary insurance as politicians globally ignore centuries old basic economic laws that clearly prove that printing money and maintaining high debt levels to solve short term political problems always ends up creating more problems.

Gold is the people's choice for safety and lasting value. 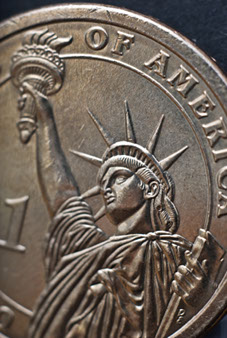